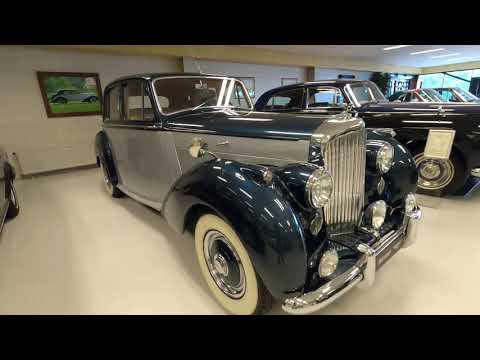 The Mk VI 4-door standard steel sports saloon was the first post-war luxury car from Bentley. Announced in May 1946 and produced from 1946 to 1952 it was also both the first car from Bentley with all-steel coachwork and the first complete car assembled and finished at their factory. These very expensive cars were a genuine success. In 1951 the engine displacement was increased from 4257 cc to 4566 cc  by increasing the bore of the cilinders. By the end of 1952 order-books had shrunk and the Mark VI was replaced by the R-Type.

This particular Mk VI was first delivered in 1952 to mr. Alfred Garcia in Gibraltar. Mr Garcia lived almost next door to the former dealership. In 1978 mr. Donald Newman bought the car and exported it, after a 5 year stay in France and England, to the USA. In 1987 mr. John Peter Wicker, a real estate broker from Montville, USA bought the car. In 2006 John van den Prijt from Brabo Rolls-Royce & Bentley specialist found the Mk VI in New York and decided to buy it.

The Mk VI has been produced 5205 times of which 1201 with the bigger 4566 cc engine. From these 1201 only 32 have been produced as a lefthand drive, making this particular Mk VI a unique car. Together with the restoration and the condition in whcih this automobile still is, one will not find a better example. Visit our showroom and convince yourself.