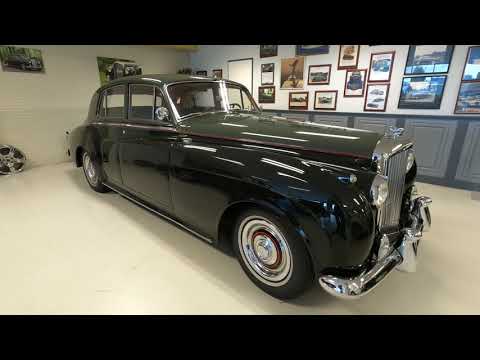 The Bentley S (and ‘sister’ Rolls-Royce Silver Cloud) were introduced to the public for the first time on 22 April 1955 at the Hinds Head Hotel in England. It was noted that the S1 would have a standard steel 4-door body, but because of the use of an independent chassis coachbuilders could also create bodies to the wishes of the customer (this option disappeard in 1965 when the T-series with monocoque self carrying body was introduced).

The new standard steel saloon replaced the R-type standard steel saloon. It was a more generously sized five-seater saloon with the body manufactured in pressed steel with stressed skin construction. Doors, bonnet and luggage locker lid were of aluminium.
Having a totally new external appearance, although with the traditional radiator grille, the main differences from the R-type were:

The S1 name is actually not correct. The Bentley was simply called 'S' at its introduction. In late 1959 the V8 engine was introduced which made the name S change into S2, in 1962 when the twin headlamps were introduced the name changed into S3. Automatically everyone nowadays refers to the original S as S1.

This particular S1 was build in 1959 and delivered on the 10th of April of that same year to mr. Harold C. Whitman in New York USA.
From 1978 till 2006 the car was owned by mr. or mrs. Hardy and Mr. Arnold Davis (the date of the ownership change is unknown). Mr Davis was a well known New York art dealer/collector.

Having had so few owners the car was in a good shape when we (BRABO) found it in 2006. While starting a restoration on the car the latest owner got interested and bought the car during that proces. This latest owner was a Dutch well known chronometric specialst who could even count the Dutch royal family among his clientele. A craftsman as meticulous as he wanted the car to be perfect, so we made it perfect: Body painted in the current colorscheme (5 layers, 2 clearcoat layers), all new rubbers. Complete interior redone complete with new leather, new laquered wood (12 layers), new carpets. All necessary technique done including suspension, brakes, ignition, fuel system, steeringsystem, the major part of the electric system.
Proveable maintanance since 2010 available.

This beautiful, carefree, very well maintained Bentley S1 has always been a very welcome guest with the Dutch Bentley and Rolls-Royce club and concours d'élegance events in the Netherlands.

THIS CAR HAS JUST BEEN SOLD! Please keep an eye on our website for the next Silver Shadow that comes up for sale. Rolls-Royce Silver Shadow, 1970, LHD. Finished in Green with a Green leather interior. Runs very well on petrol and on LPG. APK/MOT till July 2022....